Mud is the medium 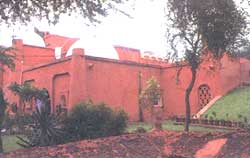 ARCHITECTS hoped to establish mud as a viable building medium when they set out to build the country's first major environmentally-sound building. The mud headquarters in Delhi of Development Alternatives (DA) headquarters was built to prove a point, recalls Shrashtant Patara, a DA architect. "It was one of the first major attempts to prove it is possible to build an environmentally sound, resource-conserving, contextually appropriate building system,'' he said.

In 1987, a team of architects and engineers headed by Ashok Khosla, founder of DA, began construction of a 930 sq mbuilding (10,000 sq ft) and completed it in 1989. "The main objective of the group was to demonstrate that raw earth was a viable construction material," says Neeraj Manchanda, another architect involved with the project. "It was also meant to prove that earth buildings could be designed to comply with the construction codes of urban development authorities."

At the outset, a suitable soil block press was designed jointly by Valmiki Nathen, a mechanical engineer, and Sanjay Prakash, an architect, and named the BALRAM press. The building was designed as a composite structure that would use a range of mud-building techniques, including mud blocks made by the BALRAM press with clay brought in specially from Mehrauli, in south Delhi.

None of the trees on the building site was cut; instead, the overall plan was drawn to accommodate them as part of the landscape. As the doors and windows were arched and without frames, the need for wood, cement and steel was kept to a minimum.

As this was the first mud building to be submitted to Delhi Development Authority for clearance, DA designers took great care to calculate and establish the carrying capacity of unstabilised mud blocks. Manchanda concedes several mistakes were made and many hard lessons learnt. As the walls were built initially with compressed mud blocks without cement stabilisation and lime-based plaster, the plastering began to peel in the rain and had to be replaced with cement. A dome measuring 7 m in diameter -- making it the largest mud-built dome in Asia -- was built initially with unstabilised mud blocks. It collapsed during construction and had to be rebuilt using stabilised mud blocks and now it can reportedly withstand any load or weather condition.

Manchanda pointed out that though it is possible to do much more in terms of thermal efficiency and lighting. But, as compressed mud blocks behave almost like brick, it was not possible to adopt radical steps to control internal temperature. The lighting in the building also turned out to be inadequate because the walls were painted white to optimise natural lighting, but as mud walls do not have the smoothness of cement-plastered walls, the result was a disappointingly dull lighting that has made it necessary to install artificial lights.