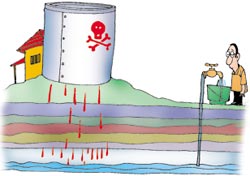 redesigning of underground fuel tanks to stop the leakage of mtbe (methyl tertiary butyl ether) is a better way to avoid groundwater contamination than replacing the carcinogenic additive with alternatives, as per a research. The study shows that mtbe alternatives pose as much of a threat as their predecessor.

mtbe is an oxygenate, commonly added to gasoline to beget complete combustion, which in turn leads to less emissions of harmful gases. But the non-biodegradable mtbe often leaks from the tanks of gas stations and contaminates drinking water supplies. Therefore, it is being banned across the world, especially in the us. "Several other oxygenates are being added in formulations supplied to gasoline stations. However, unlike mtbe, there is virtually no research on the environmental behaviour of these alternatives,' says Tom Shih, a scientist with the California environmental protection agency.

The researchers found that mtbe was the most widespread contaminant; it was detected in 82.5 per cent of the sites. tba was found in 61.1 per cent places, while the other three oxygenates were detected at frequencies below 25 per cent. Shih says their findings are reason enough to stop the leaks before they start. "Moreover, it is more costly to mitigate the affects of a leak than to prevent it.' The other solution is the use of ethanol