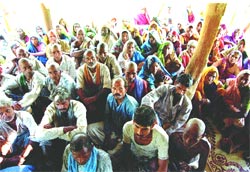 Legally, Paras Nath doesn’t exist. At the age of 52 he is still clueless about where he hails from. Nath was barely five years old when he began toiling hard to grow sal trees in the forest. “Even my parents were not able to trace their antecedents, but they too spent their life planting trees here,” he says resignedly, sitting in front of his thatched house.

Nath’s is not an isolated case. About 26,000 people in the forests of Maharajganj and Gorakhpur districts of Uttar Pradesh (up) are facing a similar identity crisis. They are known as the Van Taungiyas