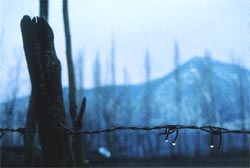 Tourism...handicrafts...agriculture...forests... lakes - Jammu & Kashmir's (j&k) basis of survival for ages. They still constitute 98 per cent of the state's economy and sustain 90 per cent of its population. Kashmir's economy is nothing but a sensitive and organised use of its ecology. After 15 years of living under the shadow of the gun, finally, when hope is making a comeback in the state, Kashmir will have to turn to its immense environmental resources to sustain this resurgence.

Beginning September-October 2002, when people voted in the assembly elections defying a boycott call by militant organisations, to new chief minister (cm) Mufti Muhammad Sayeed's almost obsessive agenda of giving a "healing touch' to his people, there are unmistakable symptoms of a rebirth in j&k. "There is a genuine desire for peace in the state now,' says Jammu-based veteran journalist Balraj Puri.

And the desire is definitely acute, as the cm himself puts it: "Hopes of 50 years are on my government. We are at the crossroads.'

The days of unrest have taken a frightening toll. About 40,000 dead. Infrastructure worth Rs 250 crore destroyed. Crippling droughts that have pushed the state to starvation. "The government requires Rs 40 crore a month to make purchases under the pds from the Food Corporation of India and at present, it finds it hard to pay even this amount,' admits Taj Mohiudin, food and supplies minister. Fiscal anarchy and rampant corruption has seen the state move from a situation of a surplus of Rs 24 crore in 1994-95 to a deficit of Rs 2,166 crore in 2000-01, according to finance minister Muzaffer Hussain Beig's budget speech. Militancy has restricted the government's reach so drastically that the arrears of revenue collection amount to Rs 1,000 crore (2001-2002). "Without the arrears, the government has also cut down on funding to less priority departments such as forests and wildlife,' says a finance department official.

Shoddy environmental management has aided the economic quicksand that the state currently finds itself in. Even though j&k's forests were kept out of bounds for its people, they sustained 50 per cent of the state's population living in and around them. The state's famed woodcraft trade, employing close to 100,000 people and the source of the cricket bat industry, draws its sustenance from forests. In 2003, the World Cup fever ensured sales of about two million willow bats.

But forest cover has come down by 20 per cent in the last two decades, and agricultural productivity has decreased by 50 per cent, particularly in the last five years. Lack of access has served to speed up the depletion. There is intense pressure for timber and other resources on a few patches, and these are being stripped bare. Grazing, for instance, has taken a heavy toll. The state has a huge livestock population. Of the 20,18,200 ha under forests, not more than 50 per cent is available for grazing. Assuming 3000,000 cattle graze in the forest areas, the grazing intensity is more than three cattle per ha. For proper grazing, cattle require two ha per head. Thus, the grazing intensity is at least six times the permissible level.

Says A R Wani, a retired principal chief conservator of forest (pccf), "Political instability has facilitated the process of environmental degradation.' Tourism, the mainstay of the state's economy, has taken a severe beating. The j&k government estimates that the economic loss from tourism alone is worth Rs 500 crore every year.

The only way ahead, therefore, lies in sustainable management and utilisation of the state's natural resources. According to