As strong as steel 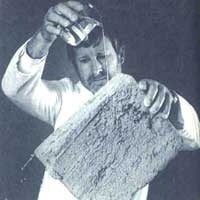 MUD IS no longer inferior. As a building material, it can be strengthened and stabilised to function as a viable alternative to concrete and steel.

Traditional mud-building methods include mixing specified quantities of rice husk, cow dung or lime with raw earth. One of the oldest techniques is the wattle- and- daub method, in which mud is meshed with sticks for strengthening. Making adobe blocks, or sun-dried bricks, is another simple process used extensively in the rural areas of Kerala and Tamil Nadu.

Major drawbacks of mud as a building material are its low tensile strength --it breaks if stretched or placed under stress -- and high water absorption. Mud blocks made of certain soils increase in volume on absorbing water, and shrink when dry, leading to cracks in mud structures.

Revathi and Vasanth Kamath, who were formerly on the faculty of the Delhi School of Planning and Architecture, have developed a technique of using mud without additives. They suggest that to make unstabilised blocks, mud and water could be mixed and kneaded about five times in as many days to give it plasticity, and then the blocks would be baked in the sun.

As sandy soils are less amenable to compaction, they canbe mixed with clay to achieve the desired compaction level. And, as black soil contains more organic matter and therefore absorbs water easily, it can be treated by mixing with sandy soil. All these methods are used widely in adobe technology. Stabilised mudblocks are made by mixing mud with additives like cement, lime, jaggery syrup or starch solution. They are then compressed and dried in the sun. Compression not only gives mud blocks uniform strength, it also increases their cohesive and tensile strength and makes them better building material. Bitumen can also be mixed with mud to increase its water resistance and increased compaction reduces a mud block's water absorptive capacity.

A significant breakthrough in mud technology was achieved at the Victorian University of Technology (VUT) in Melbourne, when researchers developed a liquid that gives mud bricks water penetration resistance almost similar to that of clay bricks. The water-based repellent has been used successfully in a mud housing project in Port Moresby, the capital of Papua New Guinea, and this offers an enormous cost-saving potential for developing countries such as India.