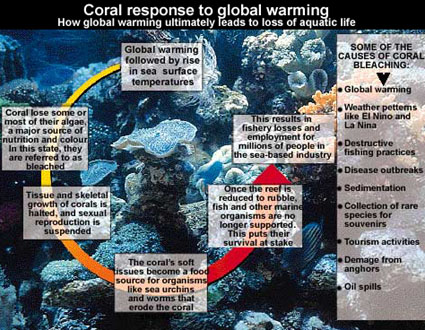 In the old days, miners carried canaries with them when they went to the shafts to dig out coal. Canaries were to serve as an indicator for the presence of the toxic methane gas in the mines. When the canaries showed any sign of discomfort, miners were forewarned of the presence of the gas. As with canaries and frogs, which are called sentinel species, corals too are also considered to be among the most sensitive ecosystems to long-term climate change. Goreau calls them the "canary in the coal mine of global warming'.

Coral reefs, however, have been surviving major environmental events such as Ice Age, meteor strikes, and increased solar activity since the Mesozoic era (about 200 million years ago). Notwithstanding these events, corals have recovered to form the extensive reefs we see today. However, in just 50 years, human activities coupled with natural ones have stressed corals far too much. "These stresses are threatening the existence of reefs in some areas, and will diminish the value of reefs in other areas,' says Wilkinson (see box: Food for thought ).

There are one to two million algal cells per square centimetre of coral tissue. Corals obtain nourishment from the carbon compounds emitted by algae through photosynthesis and the algae, in turn, gets shelter and other nutrients like nitrogen and phosphorus from excreted products of corals. When corals are stressed, this symbiotic (or co-operative) relationship with the algae is lost. The corals may lose some or most of their algae. In some species, tissue and skeletal growth is halted and sexual reproduction is suspended. Corals can survive if the stress is brief but will die if prolonged, says Rodrigues. "However, it may make corals highly-susceptible to infection from a variety of opportunistic microorganisms,' says Goreau. "Once mortality occurs, the coral's soft tissue becomes a food source for scavengers, making the increasingly bare skeleton a feasible site of attachment for rapidly-growing seaweeds and other organisms' (see diagram: Coral response to global warming ).

As long as the structure of corals are maintained, they offer protection to a wide variety of marine life. If favourable conditions return and are sustained, coral larvae may settle down on reef structure, renewing the reef-building process. However, in many cases where large populations of sea urchins and worms erode the bare skeleton, the reef becomes vulnerable to destruction by storm surges, note experts. Once the reef is reduced to rubble, experts warn that fish and other marine organisms are no longer supported. "In turn, fishery resources will be depleted and this will affect the livelihood of coastal communities,' says Rodrigues.

"Over geologic time, coral reefs have enabled the formation of lagoons and calm shorelines where seagrass and mangroves can flourish,' says Y Baskin in The work of nature: How the diversity of life sustains us . With the reefs gone, not only will mangroves and lagoons disappear, the mainland will be exposed to all kinds of disasters