TOURISM & HANDICRAFTS: Backs to the wall 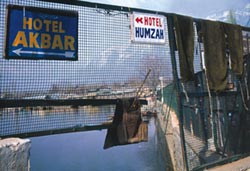 Some 1,400 empty, rotting houseboats ringing the Dal Lake provide mute testimony to tourism and the craft industry's demise in the state. Each houseboat, sustaining five families on an average, is a story of human tragedy. Sheikh Baseer, a houseboat owner, recently got his first tourist in seven years. But the visitor stayed in his houseboat for just one day. "I had to dust off the houseboat as it had not been in use for years, and the tourist didn't like the dirt,' he says. Baseer, who used to earn Rs 10,000-15,000 a month just a decade ago, is about to sell his houseboat as scrap.

According to the Houseboats and Shikara Owners Association, the Valley is currently receiving around 2,500-3,000 tourists per year on an average. About five million visitors still flock to Jammu and Vaishno Devi every year, but very few of them divert to the Valley. The association puts the combined economic loss at about Rs 1,000 crore a year. One unwelcome fall-out of this has been a spurt in child labour: to survive, many houseboat-owning families now send their children to work as carpet weavers.

In the early 1980s, around five million people, with an average stay of three days per head, visited the state annually. Tourism was earning an impressive Rs 12,000 crore for the state every year