The turtle and the shrimp 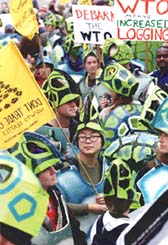 The shrimp and turtle case brought up by the US against some developing nations highlights the tremendous influence civil society can wield to monitor environmental governance in other countries. It all started in 1989 when the US Congress passed a law to prohibit the import of shrimp harvested in ways which were harmful to sea turtles, which are listed in the Endangered Species Act. The contention was that the number of turtles killed while harvesting shrimps should not exceed the turtle kills of US fisherfolk. The use of turtle excluder devices (TEDs) to minimise turtle kills was also recommended.

Abiding by this new law, the US imposed a unilateral ban on the import of shrimp and shrimp products from errant nations in 1996. Indignant over the decision, India, Pakistan, Thailand and Malaysia challenged the US move before the WTO's dispute panel in January 1997. They alleged that the US had taken a unilateral, extra-jurisdictional conservation measure, amounting to discriminatory trading practices.