United, these survive, save and survive 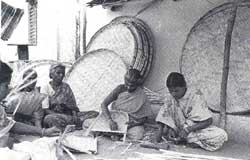 Nagamani's sangha is one of five functioning in Dhenkanikottai, thanks to MYRADA, formerly Mysore Rehabilitation and Development Agency, a voluntary organisation based in nearby Bangalore, which began working in Dharmapuri district three years ago. The sanghas, with 20 to 30 members each, were formed on the basis of occupation and residential location. The Mahalaxmi and Rojamalar Mahila Sanghas consists of bamboo weavers. The Iswar Laxmi Mahila Sangha is unique because it unites washerwomen, and the Poongkadi and Srirumallar Mahila Sanghas bring together workers who make chalk crayons.

Yellamma said before the Rojamalar sangha was formed, they worked as contract labour for outsiders who supplied them bamboo and paid them a pittance for the finished products. "Now we get our own bamboo by bus from the Marandahalli forests and make thattus (large flat baskets) for rearing silk worms. The cost per piece is Rs 25 and we sell each thattu for Rs 35. Each sangha member now earns about Rs 500 per month," she said.

Manimeghalai, another member, said she had saved Rs 1,600 so far, and explained, "We are now independent and no longer exploited by outsiders. We can send our children to school and feeding and clothing the family is no longer as much of a problem as it used to be."

Most sangha women in Dhenkanikottai are landless and belong to scheduled castes, who depended on the upper-caste villagers for a living. Yellamma, for example, belongs to the Medhakara caste, whose traditional occupation is working with bamboo. Yellamma was only 10 when she learnt her bamboo-making skills from her mother. "We used to exchange baskets for paddy," she remembered. But growing urbanisation and monetisation eroded traditional jajmani (patron-vassal) relationships and denuded the area of its forest cover, causing fuel and fodder problems and almost wiping out bamboo weaving.

MYRADA has organised more than 500 mahila sanghas in the region, some involved in land-based activities, others in sericulture and still more in marketing projects. Arranging for credit, bulk purchasing of raw material through the Tamilnadu Women's Development Corp and lead banks are some of the activities undertaken. "We try to empower the women by organising them so they can fend for themselves," explained Vidya Ramachandran, a 10-year MYRADA veteran. MYRADA makes suggestions, but the choice of which activity to pursue is left to the women, she added. MYRADA assigns to each sangha one animator who looks after the accounts and maintains registers and trains educated women to take over the job.

The washerwomen of the Iswara Mahila Sangha are clear proof that even illiterate village women, once organised, can perform challenging urban tasks. After forming their sangha, the washerwomen negotiated a contract to do the laundry of the Titan watch factory at Hosur. Kamala, one of the members, explained, "The profits are shared equally and so are the responsibilities. Damages, if any, are paid for by the whole group." With the Titan contract in hand, sangha members negotiated a loan of Rs 64,000 from the Indian Bank and bought an autorickshaw that they use to deliver and fetch laundry. The Iswara sangha members are trying to increase their monthly earnings of about Rs 350 by negotiating contracts with other establishments in Hosur. However, the local trade unions are creating problems, sangha members said.

All the sanghas emphasise saving regularly. Iswara sangha members, for example, have saved Rs 17,000, the Mahalaxmi sangha's total is Rs 14,000 and the Poongkadi sangha has Rs 12,000 in its accounts. Each sangha also lends money to its members, charging nominal interest.

Suggestions that the sanghas are being spoon-fed by MYRADA draw sharp rejoinders from the members. Rajamma of the Mahalaxmi sangha said emphatically, "The sangha is ours. MYRADA helped us form it and get loans. But we do not blindly accept whatever they say. Sometimes we even point out to MYRADA workers that they are wrong."

Socially, the sanghas have given a new dimension to the members' lives. Says Kamala, "Before the sanghas, we did not bother even about our immediate neighbour's problems. We led individual lives. But now we discuss and sort out our problems together." Citing an example, Kamala said another sangha member, Laganamma, left her home, fed up with her husband's addiction to alcohol. Sangha members persuaded her to return and gave her Rs 2,000 to repay her husband's debts. Now, Laganamma says proudly, "My sisters really helped me at that time. They threatened to socially boycott my husband if he did not mend his ways. The fellow has given up drinks since."

Errant husbands are a major problem for many sangha members and not all have been handled as successfully as Laganamma's husband. "We have not been able to control all the vices of our men, but things are better than before," commented Yellamma. "At least we get the money to look after our children." Kamala disclosed the husbands initially opposed the women getting together. "But," she added, "they have now accepted it because of the money we bring. Our men formed a sangha after us, but we are doing much better (because) before borrowing money, we think twice. The men borrow for trifles and their repayment rates are very poor. We are very particular about returning loans on time."

Chinamma, a bamboo worker, echoed her, saying: "The men have to change their carefree attitude toward us and themselves. They have to be more responsible towards the children. After we have got united, they have begun to realise these things."