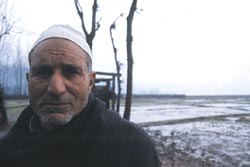 status: Most of the major lakes are dying

Over a mile above sea level, around the Wular Lake, a few of India’s once richest villages are fighting a losing battle against poverty. It is a poverty that is induced as much by a callous state government as by degradation of the Wular.

What the Nile is to Egypt, Wular is to j&k. It supplies around 40 per cent of the Valley’s fish. About 80,000 people depend on it for survival. The turnover of the lotus stem trade from this lake is worth about Rs 2500,000 a year and involves close to 20,000 people. Abdul Ahmed Dar, a resident of Kema village, collects about 100 kg of lotus stems from the lake every day during September-March. In return, he only gets a measly Rs 3 per kg. The government leases the produce to private contractors, who sell it at Rs 15 per kg. For fishing, locals get a license by paying Rs 220 per year. But the condition of the lake has deteriorated and it is impossible to get any fish.