What is El Nino? 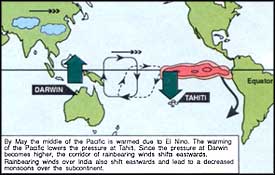 EL Nino refers to the warm current that flows southward along the coasts of Ecuador and Peru, between January and March, which marks the end of the local fishing season when the sea temperature falls.

Some years, however, the temperature continues to remain high. This anomaly, which occurs every two to seven years, first made news in 1972, when the continued warming of the surface waters of the Pacific Ocean caused the complete collapse of the overfished Peruvian anchovy industry.

It was in the 1960s that a Scandinavian scientist, Jacob Bjerknes, first established a link between this anomalous surface temperature event and the Southern Oscillation, which is a global seesaw of atmospheric pressure over the Indian Ocean and the Pacific Ocean.

The Southern Oscillation itself was discovered in 1924 by Gilbert Walker, the first director general of the Indian Meteorological Services, when he was trying to track the variability of the monsoon. He observed that when pressure is high over the Pacific Ocean, it tends to be low over the Indian Ocean from Australia to Africa. As pressures are inversely related to rainfall, it implies that low pressure over the Indian Ocean would result in a good monsoon.

Four pressure parameters are related with the Southern Oscillation Index (SOI) - essentially the difference between sea- level pressures at Tahiti in the south central Pacific and Darwin in Australia - which provides important clues to the monsoon. The differential heating of land and water generates two circulation cells, namely the Walker and Hadley cells, which dominate the monsoon's working. The ascending branch of the Walker cell is located over Indonesia, where, because of convection and heavy precipitation, a heat source is generated. The descending limb is located over northwest India, Pakistan and West Asia.

Sometimes, however, prior to the El Nino, the Walker Cell is displaced eastward to the region between New Guinea and the international dateline. The sea-level pressure at Darwin increases and there is a slight warming of the surface waters near the dateline. A negative SOI develops indicating an El Nino and, consequently, a poor monsoon. However, a positive index presages a good monsoon.

With the moisture feeding mechanisms adjusting on shifting eastwards, rainfall over the Indian sub-continent, Indonesia and other areas decreases. An El Nino in one year invariably means a drought that year, although it holds promise for abundant rain the following year.