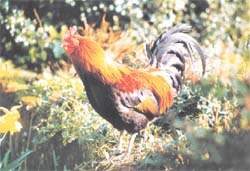 The red jungle fowl (RJF) is one of the four jungle fowls found in the Indian subcontinent belonging to the genus Gallus, the other three being grey, Ceylon and green. It is also know as Gallus bankiva or Gallus gallus murghi.

RJF is distinct in its appearance. It's strikingly colourful plumes and a majestic red comb gives it a regal appearance. But what makes it unique is the eclipse plumage, which is now used to identify the bird. According to Satya Kumar, scientist at the Wildlife Institute of India, Dehradun: "The shape of the plumage makes it easier for the bird to escape quickly from predators through undergrowths and bushes.'

The male plumage and the colour of the ear lobes differ according to the climate and geographical location. The shade of red varies from golden yellow to dark mahogany. There are also some differences in shape and length of the neck feathers among males. This divides the red jungle fowl into five clear subspecies: Cochin-Chinese red, Burmese red, Tonkinese red, Indian red and Javan red. Among unique characteristics of RJF is that it sheds its plumes in the summer. The hen, which can lay up to nine eggs in one sitting, has no visible comb or wattle.

The RJF population is distributed across the Indo-Malay peninsula. Apart from varied geographical locations, it also lives in most varied habitats