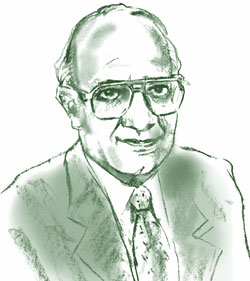 In an autobiographical piece, Professor Amulya K N Reddy described himself as a "socially responsible scientist' and a "maverick'. This self-description fitted him to the cue. Prof, as he was known to those who worked closely with him at the Indian Institute of Science (iis c ), Bangalore, and the Karnataka State Council for Science and Technology, passed away on May 7, 2006 after a protracted struggle with chronic kidney failure. Over the last few weeks, those of us who worked with him have asked ourselves repeatedly: why have Indian scientists lost concern for the socially and economically depressed sections of society? In the celebration of the information and knowledge society, there is little concern for the broad majority who do not participate in these fantasies.

Prof understood that technological hubris never took anybody far and tried to address the mismatch between India's technological achievements and its suffering millions. This inspired his move from a career as an electrochemist at iis c to the energy and developmental needs of rural India in the early 1970s. Prof was 43 then.

The optimism over science and technology that marked the 1950s was beginning to fade in the 1970s. It was not just the energy and environmental crises that were pressing for a new response, but there was also growing scepticism that the developmental mandate had outlived its utility or perhaps even failed to deliver. This triggered some responses amongst people who worked within the realm of science policy, but more importantly there were experiments to reinvent science and technology with a different developmental perspective. Prof made his career switch during this period. He mobilised a group of scientists at iisc to create a cell for the Application of Science and Technology to Rural Areas (astra).

Proposing a research programme radically different from the priorities of India's elite institutes, required courage. Prof took it upon himself to convince his colleagues that the problems of rural India required inputs of first-rate scientists and that this science was not any less important than that being pursued in the departments. Thus while he developed new criteria for the choice of technology and relevance, at no point did he undermine existing research priorities. He was opening a new window and exhorted his colleagues to join him; several did.

In this transition from hard-core science to appropriate technology, Prof enlarged his collegial circle to include some of India's leading social scientists. His conversations with the educationist J P Naik, leading economists such as Amiya Bagchi, Nirmal Chandra, C T Kurien, K N Raj, Joan Robinson, policy-makers that included P N Haksar, C Subramaniam and M Y Ghorpade, as well as his relationships with leading scientist colleagues both in India and abroad played a significant role in setting up astra's agenda.

The critique of modern technology launched by Ashis Nandy and Shiv Viswanathan and others disturbed him profoundly. He was compelled to clarify his own views on the matter and to come up with an effective riposte. He also came down heavily on technological neutrality and the linkages between science and violence. "After Pokhran ii, there was a distressingly small minority of Indian scientists who spoke up against the nuclear tests. Though I was one of them, my attitude intensified later,' he remarked on one occasion.

This brings me to his close association with social movements, peoples' science movements in particular. Whether the struggles of the science movements involved issues of energy policy, big dams, intellectual property rights or nuclear disarmament, Prof always lent his analytical weight to the cause.

He will be deeply missed in these circles, particularly so in an environment where science is considered not so much about the common good, but about commodities, products and patents.

Efficient management of science was another important concern of his and is reflected in his writings on questions of science and governance. Having seen through the miserable experiments with building scientific institutions and organisations in India, he struggled, to say the least, to go beyond the impediments he had identified. But to put it mildly, he was finally dissatisfied with the results.

Prof lived in a lane where he had his colleagues, the late lamented Satish Dhawan and S Ramaseshan, for neighbours. All three entertained a vision of science in India. Many elements in this vision were shared; the pictures may have differed in detail. Straying down that street I cannot but