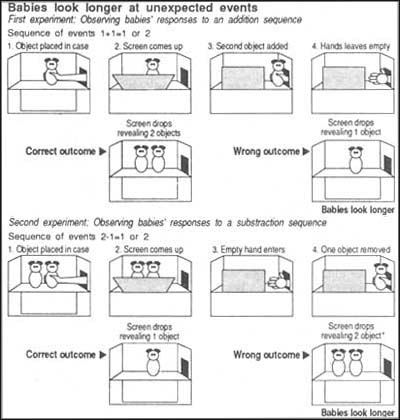 AFTER discovering that babies are not as passive and helpless as they appear to be, adults are trying to figure out whether infants can do sums. In 20 years of research, it has become known that babies can differentiate and even tell if someone's lip movements match the speech they are hearing. Studies conducted by Karen Wynn of the University of Arizona, USA, now show that babies can compute simple arithmetical operations, and that this capacity may influence the development of their mathematical skills (Nature, Vol 358 No 6389).

Wynn conducted three experiments using the looking-time procedure -- based on the premise that babies look longer at unexpected events than expected ones -- that has become standard in infant cognition studies.
Two groups In the first experiment, 32 infants with a mean age of 5 months, were divided into two equal groups. The first group saw a single item in a display area and then a screen went up, hiding the item. The babies then saw a hand going behind the screen with a second identical item and leaving empty. After the addition (1+1) was made, the screen was pulled back six times, alternately displaying two items (correct) and one item (wrong), and the looking time of the babies was recorded. Wynn found the babies stared longer at the display area showing the wrong result than at the display showing the correct result of the addition.

The second group was shown a display of subtraction. They saw two items in the display area and when the screen went up, the babies saw an empty hand going in and removing one of the items (2-1). The infants then saw six displays, alternately showing one item (correct) and two items (wrong). In this case too, the babies looked longer at the display showing the erroneous result of two items than at the correct display of one item.

In the second experiment, a replica of the first involving 16 subjects, a similar pattern of results was obtained. Wynn claims that for the babies to have looked longer at the incorrect displays than at the correct ones, they must have made some sort of mental calculation. The results indicated that the infants could either compute results of simple additions and subtractions precisely or that they expected a change without being aware of its magnitude or direction.

Wynn conducted a third experiment to find out whether babies could make precise calculations. Sixteen infants were shown the 1+1 addition display, but the results behind the screen were either two (correct) or three (wrong). The infants looked longer at the display are when the addition resulted in three, indicating they were calculating the exact result and not just reacting to an alteration.

The results of the experiments back the claim that 5-month-old infants can calculate simple arithmetical operations.

But do babies fully understand addition and subtraction and the inverse relationship between them? Well-known child psychologist Jean Piaget has argued that children do not recognise the inverse relationship (5+3 = 8, therefore 8-5 must be 3) until they are about 8 years old. However, Wynn's speculation that the babies' capacity may be the basis for their future arithmetical skills is in line with studies that have shown looking-time in experiments on babies' perceptual skills to be related to their later IQ. But it is still not clear whether a baby's potential in arithmetic can indicate how well it will learn to read.