Asia countries say no to US cancer sticks 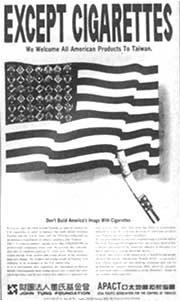 When governments are desperate for cash, they sell death. While South American countries deal in cocaine, the US government is taking to aggressive pushing of its tobacco industry.

In Korea, the opening up of cigarette markets recently increased smoking rates among male Korean teenagers from 18.4 per cent to 29.8 per cent in a single year. Among young women, the rate rose from 1.6 per cent to 8.7 per cent. But ignoring this, the US administration is using all its power to squeeze open markets in Asia even as national governments attempt to protect the health of their people.

Recently, the fat hit the fire, when Taiwan and China, in separate moves, enacted laws to prevent tobacco use. Taiwan's proposed law restricts smoking in public places, prohibits all direct advertising and promotion, and puts into effect an aggressive public education campaign.

Though the law applies equally to foreign and domestic producers, US tobacco companies are claiming that it is discriminatory. The reason they give is that the Taiwanese tobacco industry controls about 85 per cent of the market, and a ban on advertising and promotion will prevent US companies from increasing their market share. In a letter to the Taiwanese government, the US Trade Representative (USTR) refers to the importance of cooperation, "at a time when Taiwan is seeking active consideration of its GATT application".

China passed its first anti-tobacco law in early January this year. But in a letter written in October last year, the assistant US trade representative had stated, "Because of discriminatory Chinese government import controls, the volume of cigarettes exported from the United States into Chinese markets is the lowest that it has been for several years." China, which has the world's largest population of smokers, desperately needs legislation to check smoking. Surveys show that 61 per cent males over 15 years smoke.

Thailand had earlier banned all direct cigarette advertising by its state-owned monopoly and import of foreign cigarettes. But the US government took the case to GATT, which ruled that its tobacco import ban was trade discriminatory, but its advertising ban was acceptable.

Tobacco companies are getting a beating in western countries as well. Sports-mad Australia has announced a ban on sports sponsorships by tobacco companies effective from 1995. An Australian court, in a landmark decision which was the first of its kind in the world, has ruled this fortnight that an employer has to pay US $64,500 for failing to protect an employee from asthma bouts caused by the cigarette smoking of other staff members.