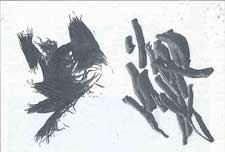 SCIENTISTS working to develop new Ayurvedic drugs are concentrating on the treatment of memory disorders. Says Sukh Dev, professor of chemistry at the Indian Institute of Technology in Delhi, "Ayurveda prescribes several remedies for improving memory and intelligence. Our experiments are validating many of these claims."

Sukh Dev and his team have prepared extracts from several plants that are classified in Ayurveda as having memory enhancing properties and tested them. The extracts are from plants such as ashwagandha (Withania somnifera), shankhapushpi (Convulvulus pruricaulus) and jattamansi. The researchers say the way in which these plants affect the brain is different in each case.

Ashwagandha and shankhapushpi alter the concentration of neurotransmitters -- chemical substances that are known to play an important role in mental processes such as memory. For example, an abnormally high level of Gamma Amino Butyric Acid (GABA) or a reduction in the level of acetlycholine, both neurotransmitters, can affect memory.

Sukh Dev says recent tests showed ashwagandha reacts strongly with GABA, while shankhapushpi enhances acetylcholine concentration and jattamansi stimulates production of a chemical in the brain called nerve growth factor that can reverse nerve decay caused by aging. His hopes are high that jattamansi could yield a drug that could arrest memory decline in the elderly.

Sukh Dev's Ayurvedic drug development project is being carried out in collaboration with National Institutes of Health (NIH) in Maryland, USA. Plant extracts prepared in the IIT laboratory are sent to NIH for testing. His research at IIT is a continuation of his work at the National Chemical Laboratory in Pune and the Malti-Chem Research Centre in Baroda.

The thrust of Sukh Dev's research is to verify through modern testing techniques the efficacy of medicinal plants listed in ancient Ayurvedic medical texts. "Ayurveda materia medica represents a treasure trove waiting to be explored by modern techniques," he says.
Earlier success Sukh Dev's research has already led to the development of "guggul", an Ayurvedic formulation that is being marketed for treating obesity, lipid disorders and rheumatoid arthritis. The development of "guggul" is an excellent example of the development of modern drugs from medicinal plants.

The plant was selected for research after studies showed it is an effective anti-inflammatory and anti-cholesterol agent. The pure compounds responsible for the medicinal properties were isolated and characterised by detailed chemical analysis. After clinical testing for efficacy and toxicity, a standard composition for the drug was decided and it was cleared for the market under the name Guglip.

Guglip proved comparable to the most potent allopathic drug on the market and is also free from side-effects. Manufactured by Cipla, a Bombay firm, Guglip is being exported to USA.
New drugs Sukh Dev says he expects research in Ayurveda to provide drugs that are particularly effective in enhancing memory and intelligence, retarding aging, protecting the liver and increasing immunity. About 25 per cent of modern medicines, Sukh Dev notes, are derived from plants mentioned in folklore and texts of traditional medicine.

Traditional systems of medicine practised in other countries also have provided a fertile source for modern drug development and Zhong Yao, practised in China, is a case in point. It has been intensely researched in the last two decades and this has yielded a number of drugs whose effectiveness have received international acclaim.

In India, however, despite the considerable effort in researching Ayurvedic formulations by institutions such as the Council of Scientific and Industrial Research, the Indian Council of Medical Research and the Central Drug Research Institute, success has been limited. "Crores of rupees have been spent on the study of Indian medicinal plants and other formulations," says Sukh Dev, "but the outcome has been disappointing, chiefly because most of these studies were half-hearted, disjointed and ill-focussed. Unfortunately, India does not have adequate research facilities to study ancient Ayurvedic formulations on a modern scientific basis and develop them into potent medicines."

Sukh Dev says there is great need for a fully equipped centre to research the potential of Ayurveda drugs and the department of science and technology is considering the setting-up of such a centre with facilities for research in botany, pharmacology and clinical testing.