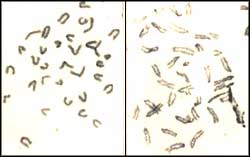 SCIENTISTS have good news for tea and coffee drinkers: they need not kick the habit for fear that the caffeine in the beverages causes cancer. Research indicates that caffeine may actually help prevent cancer caused by radiation and certain chemicals and that it can be useful in radiotherapy.

Till 20 years ago, caffeine was believed to be capable of causing cancer and of inducing genetic changes and mutation. More recently, a theory that caffeine inhibits the repair of DNA damaged by gamma and X-rays has been disproved.

P C Kesavan, radiobiologist and Dean of the School of Life Sciences at Jawaharlal Nehru University in Delhi, has discovered that in oxygen-rich cell environments, caffeine actually protects cell DNA from radiation damage.

Kesavan has hypothesised, on the basis of experiments with barley seeds and dry bacterial spores, that oxygen-rich cells, when exposed to radiation, release volatile "free radical" particles which combine with the oxygen to damage the cell's genetic structure. Caffeine, however, combines more readily with the "free radical" particles than oxygen and neutralises its damaging effect. For caffeine to be an effective agent against radiation, there must be an 80 per cent concentration of oxygen in the cell. If the oxygen level is below 30 per cent, then caffeine enhances the radiation-induced damage.

Kesavan suggests that this property of caffeine could be used as a valuable tool in radiotherapy of cancer patients. The destruction by radiation of dead cells deep within a cancerous tumour can be enhanced if the patient has a regular intake of caffeine - about two cups of coffee everyday. The outer cells, which are often non-cancerous and rich in oxygen, are also exposed to the radiation but are protected by the caffeine.

Other research has shown that caffeine provides protection against certain carcinogens which are activated by metabolic reactions, such as polynuclear aromatic hydrocarbons found in cigarette smoke and aflatoxin B1 produced by Aspergillus flavus, a fungus commonly found on peanuts after the monsoon.

As yet there is little clinical data to corroborate the effect of coffee-drinking on radiation and carcinogenic damage, but positive results have been obtained in experiments on rats. Kesavan feels that these findings could significantly enhance the prevention and treatment of certain types of cancers, and he advocates further investigation.