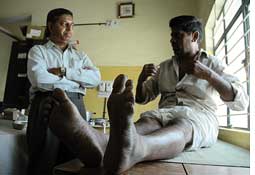 during the 2007 outbreak in Kerala, the chikungunya virus mutated into more virulent forms, says a study by researchers at the Defence Research and Development Establishment, Gwalior. The mutations, the study says, helped the virus piggyback on to a new vector.

"The re-emergence of chikungunya virus in Kerala with unusual clinical severity and high incidences of fatality was a challenge for the scientific community,' says lead researcher S R Santhosh. "We performed a complete genome analysis of the virus and compared it with 2006 Indian isolates to find out the changes,' he said. The team found out three mutations in the genes by doing a systematic serological, virological and molecular investigation. "These mutations had higher epidemic potential, unclassical symptoms and reported mortalities,' he added.

They found the new vector was the Aedes albopictus mosquito. Earlier, Aedes aegypti were the carriers of the virus. "The evolutionary shift in the virus was due to vector specificity,' Santhosh said. Since the Aedes albopictus variety is more common than Aedes aegypti in Kerala, the virus mutated so that the prevalent vector could transmit the virus. These mutations have only been found in Kerala and not in the samples from the other states, the lead author said.

According to M Kalyansundaram, director of Vector Control Research Centre in Puducherry, "We suspected that the mutations were taking place for sometime now but the confirmation has come through the study.' The study was published online in April in Virus Research.