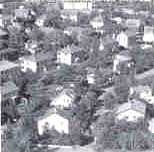 WHY is a city hotter than its surrounding countryside? The first answer that comes to mind is the availability of open space and trees in the countryside. Now, Haider Taha and his colleagues at the Lawrence Berkeley Laboratory (LBL) in Berkeley, California, and the University of California, Los Angeles, say that painting the roofs of houses in the cities white can complement the cooling effect of trees.

Taha and his colleagues simulated the effects of adding moderate amounts of trees and white roofs in a computer model of Los Angeles (LA). They observed an amazing 4'c fall in the average summer temperature. The reason - white colour wards off heat by reflecting the sunlight while trees add moisture to the air, thus cooling it. The estimated summer energy savings on air-conditioning amounted to us $100,000- 200,000 per hour (New Scientist, Vol 146, No 1970).

The model also revealed that altered temperatures and increased reflectivity, because of the trees and the white roofs reduced the smog by about 10 per cent which is "equivalent to getting rid of about 3 million cars offThe roads," says Arthur Rosenfeld, former director of LIBL'S Center for Building Science, Because chemical reactions slow down as the temperature falls, ozone produced by pollutants reacting with each other went down by 5 per cent due to the VC temperature drop.

But these results are mere simulations, reminds Taha. However, scientists at the Florida International University in Miami and the LBL'S Urban Heat Island Project group, have tried to find out how this theory would work on real houses and buildings.

Hashem Akbari, leader Of LIK'S Urban Heat Island Project, along with his group measured the air-conditioning costs before and after surrounding houses in Sacramento, California, with trees carried in trucks and applying reflective white plastic polymer paint on the roofs, The study revealed that air- conditioning costs went down by about 40 per cent, with more than half the savings owing to the reflective coating.

However, things are not as simple as they seem. For instance, many trees emit hydrocarbons, terpenes : class of volatile aromatic hydrocarbons) and isoprene which react with nitrogen oxides and contribute to Smog. In LA, trees account for about 10 per cent of the hydrocarbon pollution. Now, scientists:re categorising the trees into low, moderate and high emitters so as to make a better selection possible.

Then there is the problem of fungal and algal growth on the roofs in humid places - they would hamper the reflectivity of the surface coating. But the scientists are working on developing zinc oxide-based paints which act as a fungicide and an algicide.

And if the people do not want so much white in the city, then the researchers offer a variety of reflective coating material using raw materials which would reflect the infra red light rays. For example, reducing the magnetite amount in terracotta tiles, lowers the amount of infrared radiation absorbed.

If these heat-reducing measures are implemented in the whole of North America, annual energy savings amounting to us $10 billion within 20 years could be effected.

Though the measures offer a way to reduce energy costs and pollution, what about the winters and monsoon? Would the houses have to be painted with light absorbing colours or would the energy bill double up to keep these cool houses warm? The researchers, it seems, will now have to develop 'smart' materials which would keep the houses cool in summer and warm in winter.