Eight hearts do the work of one 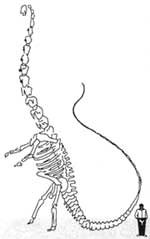 SCIENTISTS D S J Choy and P Altman working at the Investigative Cardiology Laboratory attached to the Columbia University College of Physicians and Surgeons, USA, have turned their attention to dinosaur hearts (The Lancet, volume 340, number 8818).

Intrigued by the sheer size of the Barosaurus, a long-necked dinosaur that stood 15 metres from head to foot (as compared to human beings who attain an average height of about 1.5 metres), they have tried to work out how the animal's heart pumped blood up to its head, some 12 m above.

But, they postulate, instead of a single large heart, the Barosaurus probably had some eight hearts. Thus the primary heart would generate only sufficient pressure to pump blood to the next heart and so on. The primary and secondary hearts lay in the chest region of the Barosaurus, while three pairs of smaller hearts were located, in series, in the neck, each placed 2.44 metres above the other, say the scientists.

With the exception of the first heart, which had four chambers, all the others were single-chambered. The arteries were thick-walled to prevent rupture, with check valves to stop blood from flowing back into the heart. Choy and Altman believe the Barosaurus may have been prone to coronary heart disease and stroke, because of its high blood pressure.