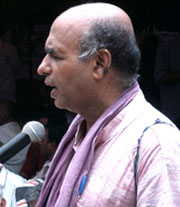 after a series of agitations demanding the protection of rights of the traditional fisherfolk community of India, the National Fishworkers' Forum (nff) has finally been assured by Prime Minister (pm) Atal Bihari Vajpayee that its demands will soon be looked into.

Even as the nff delegates were hopeful that their demands would be met, they were distressed at not being able to discuss their 42-point agenda exhaustively with the pm in New Delhi. Their wish-list includes an increase in subsidy on diesel and kerosene, and joint fishing ventures. N D Koli, general secretary of nff, says, "We have demanded a separate quota for kerosene and diesel.' According to nff members, subsidy on diesel has not been reviewed after 1991.

The nff is also protesting against joint fishing ventures. It apprehends that this would lead to the entry of foreign fishing vessels into India. "Their licences should be cancelled as they violate several norms laid out in their contracts,' says Koli. Though the agitation was called off after the pm's pledge, an incident in West Bengal could exacerbate the situation. A demonstration took a violent turn in Kakkadip, south 24 parganas, West Bengal, when demonstrators were beaten up and suffered injuries. Consequently, nff member Thomas Kocherry went on an indefinite hunger strike.

Orissa, too, is witnessing hectic activity. The Orissa Traditional Fisherfolks' Union (otfu) is demanding better conditions for its community in the state. It is pressing for the implementation of the Coastal Regulatory Zone (crz) in the state, which includes a complete ban on trawlers and prohibits fishing during the breeding season.

The state government's failure to implement the Orissa Marine Fishing Restriction Act has led to fisherfolk from Andhra Pradesh and West Bengal intruding into Orissa. According to the otfu, 80,000 fisherfolk will lose their livelihood if the government does not address the issues raised by them urgently. Meanwhile, the ban on uniform monsoon fishing by the Union government is being openly flouted in most of the states. After the reported violation of the ban by trawlers in Kerala, there are reports of similar instances in Goa.