Forlorn in the USA 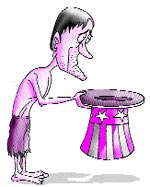 About 12 million American families last year couldn't afford to buy food. 32 per cent of them actually experienced someone going hungry at one time or another. These are some of the findings of the Agriculture Department of the us. It was the third year in a row that the department has seen an increase in the number of households experiencing hunger and those worried about having enough money to pay for food.

Discussing these details on October 31, 2003, Margaret Andrews, a department economist and an author of the annual survey, said the prevalence of hunger and food insecurity was clearly tied to the poverty rate because they fluctuate together. Some 34.6 million Americans were living in poverty last year