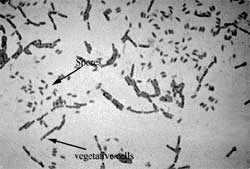 one is a notorious human pathogen, the other a highly successful pesticide. But just a few mobile dna genes separate them. Lars Andrup of the National Institute of Occupational Health in Copenhagen, Denmark has identified a novel gene-swapping system that enables Bacillus thuringiensis ( Bt ) to exchange an unusually wide variety of dna with other Bacillus . And, in the process, it can take on the role of B cereus or B anthracis and code for toxins that can cause diarrhoea, vomiting, muscle and kidney and liver failure ( New Scientist , Vol 164, No 2207).

Bt is a useful pest control bug and the us alone uses more than 500 tonnes, that is, some five billion bacteria. Similar amounts are sprayed in Europe. Bt makes a toxin that kills insects but hurts nothing else. But a close look at the bacteria reveals that it is remarkably similar to B cereus , an organism that causes about four serious outbreaks of food poisoning a year in the us . The only difference between them is a few plasmids (strands of dna ). And it now appears that Bt is well-equipped for swapping these with other bacilli.

B anthracis , which causes anthrax in mammals, Bt and B cereus were considered different species because they favour different hosts and carry different plasmids. But, now, experts believe that Bt , B cereus and B anthracis are one species. If you remove the insect-killing plasmid from Bt , there is no difference between them, says Anne-Brit Solsto of the University of Oslo, Sweden.

Though manufacturers of the pest control bug insist that commercial strains are safe, the finding suggests that Bt possesses the genes that make B cereus toxins. Research in Canada also suggests that they do code for toxins. Vern Seligy and colleagues at the Canadian federal health ministry says that at concentrations similar to those in aerial sprays, two commercial strains of Bt killed human cells in culture by producing toxins that behaved like B cereus .

The us Environmental Protection Agency, meanwhile, says there is no valid evidence to link use of Bt insecticides with health problems and has, therefore, declared the product safe.