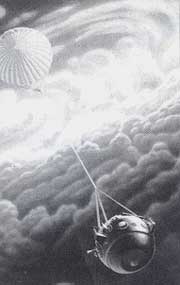 THE plucky American spacecraft Galileo, which went into orbit around Jupiter after successfully delivering a 'suicide probe' in December last year, has gradually begun to unveil the mysteries surrounding the planet's atmosphere.

, After a reasonably long wait, scientists at the us National Aeronautics and Space Administration (NASA) have now begun receiving the data collected by the 'suicide probe' following its 57-minute sojourn in the Jovian atmosphere. They say that the probe's measurements may necessitate a re-evaluation of existing views on how Jupiter evolved from the solar nebula.

The composition of the Jovian atmosphere offered some surprises to the Galileo project scientists. The 'suicide probe' found significantly lower levels of helium, neon, and certain other heavy elements, such as carbon, oxygen and sulphur. It also did not encounter any solid objects or surfaces during its entire 600 km descent; this was expected in the case of a, giant gas-planet such as Jupiter, say scientists.

"The probe detected extremely strong winds and intense turbulence during its descent through Jupiter's thick atmosphere. This provides evidence that the energy source driving much of Jupiter's distinctive circulation phenomena, is probably the heat escaping from the interiors of the planet," said one scientist with the Galileo project. "The probe also discovered an intense new radiation belt approximately 49,879 km above the planet's cloud tops and a veritable absence of lightning," he observed.

What are the implications of the information disclosed by the 'suicide probe'? Most researchers at NASA believe that Jupiter has a bulk composition similar to that of the, gas and dust cloud of the primitive nebula from which other planets and the sun were formed. The. lower-than-expected levels of helium and neon on Jupiter compared to the sun, influence scientific understanding of the process of fractionation - the 'raining out' of helium and neon during planetary evolution.

During the probe's high- speed atmospheric entry phase, deceleration measurements high in the Jovian atmosphere revealed that the density was much higher than previously believed. Corresponding temperatures were also much higher than predicted. The high temperatures appear to require an unidentified heating mechanism for this region of the planet's atmosphere, say NASA scientists.

During the parachute deployment phase, six scientific instruments onboard the probe collected data throughout the 156 km of its descent. During this phase the probe endured extreme winds, periods of intense cold and heat and strong turbulence. The extreme pressure and temperature in the planet's environment caused the probe's communication subsystem to terminate the data transmission operations to the mother craft.

Earth-based telescopic observations suggest that the probe's -entry sight may well have been in one of the least cloudy areas on Jupiter. At this location, the probe did not explicitly detect the three distinct layers of clouds - a top layer of ammonia crystals, a middle layer of ammonium hydrosulfide, and finally a thick layer of water and ice crystals - that the researchers had anticipated. But there are some indications of a high- level ammonia ice cloud being detected by the net flux radiometer. Evidence of a thin cloud, 'suspected to be that of ammonium hydrosulfide, was also provided by the scientific instruments onboard the space probe.

The data flow from the space probe has provided new impetus to the ongoing debate on the nature of the Jovian system. A clearer picture is expected to emerge after the mother craft completes its two-year study mission around the giant planet and its retinue of moons.

On the day of Galileo's rendezvous with Jupiter, NASA chief David S Goldin had predicted that by the turn of the century or soon afterwards, the agency would be launching a spacecraft once every month - small cheap machines designed to explore the solar system, and search for earth-sized planets around other stars. "The best is yet to come," he asserted.

Plans are underway to dispatch two spacecrafts to Mars late this year - one to orbit the planet and other to land an automated rover on the surface. Another ambitious mission, christened 'Cassini', is set for launch in 1997 to Saturn and its gaint moon Titan. NASA scientists have already begun work for a flight to the moon, more missions to Mars in 1998, and still another designed to fetch some dust from a comet. Progress is also being made in devising an affordable mission to Pluto, the only planet in the solar system yet to welcome a spacecraft from earth.

Goldin's optimistic observations about the future of planetary exploration probably came as a surprise to many NASA Sceptics for whom the days of extensive planetary scouting seems to have become a thing of the past. The Pioneers and Voyagers are coasting to the edge of the solar system, with their discoveries behind them. The Vikings have been relegated to the dustbin of history. Galileo, which was launched six years ago, is the only spacecraft actively engaged in studying a planet.

Notwithstanding the scepticism, the agency has managed to sectire the White House's approval on its philosophy of smaller, better and less expensive missions. But congressional support may be very difficult to come by. Growing demand for reduction in federal spending could jeopardise these and other NASA programmes.

Wesley T Huntress Jr, NASA's associate administrator for space science , says there is hope for new plans as long as they are achieved without increasing the agency's annual budget devoted to science. In the current budget, the allotment for new plans is us $2 billion out of the total us $13.8 billion. With Galileo at its destination and Cassini near completion, expenditure on two high priced projects is sharply diminished, leaving room for embarking on new missions.

To evolve a new approach to space exploration that is less expensive and focused in nature, NASA planners have come out with a concept called the Pluto Express, at an estimated cost of us $400 million, which the agency officials presume, will be affordable. Instead of packing several instruments in a single craft weighing several tonne, engineers have designed two light-weight spacecrafts weighing as little as 137 kg (approximately) each. This was made possible by incorporating new microelectronic technology and limiting the number of scientific instruments on board. Further, a high degree of automation is expected to reduce the costs of operating the craft in flight.

The Pluto Express involves launching of two crafts seperately, -perhaps by Russian Proton rockets, on 'fast' trajectories. They should be able to reach Pluto in six to eight years compared to Voyager-2's travel to Neptune in 12 years.

The Discovery programme of NASA is a starter in the direction of small, low-cost projects. The idea is to develop spacecraft with narrowly focused and precise goals for flight in less than three years at a cost of less than US $150 million, including the cost of launching four such missions. The first mission craft is Stipulated to orbit and study an asteroid, Eros.

Another approach to the future is being studied at the Jet Propulsion Laboratory (JPL) in Pasadena, under what is called the New Millennium Programme - aimed at identifying the likely science missions of the next century and determining the new technology that would be required to accomplish the objectives at reasonable costs. The first New Millennium flight, scheduled for 1998, would involve a 100 kg (approximately) spacecraft equipped with miniaturised antenna and automated controls. It will be the first spacecraft that would depend on solar electric propulsion for its main source of thrust, instead of conventional solid or liquid propellents. With electric propulsion, the craft can get continuous thrust, rather than coasting, and this would reduce the time of flight substantially, Say JPL scientists.