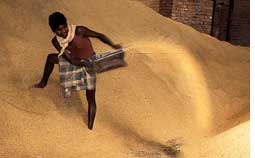 workers in warehouses are regularly exposed to respiratory diseases and allergies. Usually, grain warehouses have high concentrations of airborne grain dust which contains very harmful pesticides, bacteria, spores, storage mites and pollens. Fungal spores and other contaminants in the air can lead to serious pulmonary problems. These symptoms have been widely found among workers engaged in refilling grain bags where the air has a lot of airborne dust. Occupational diseases are generally associated with workers in hazardous conditions such as mines. The study reveals those working in relatively safer conditions are also at risk.

A Kolkata-based research team tested air samples (in summer and winter) at 17 warehouses and analysed the health status of the workers . The warehouse had high density of fungal spores like Aspergillus, Alternaria, Drechslera and Nigrospora and the workers showed respiratory symptoms like cough and breathlessness. In each warehouse, fungal spore concentration was found higher in winter.

The study found the warehouses are poorly ventilated, humid and stacked with old grains, favouring fungal spores. Most of the storehouses are infested with rodents, posing the threat of mycotoxins from the toxins the rodents carry. "This is the first elaborate study on food grain storage warehouse workers in India,' says Bhaskar P Chattopadhyay, lead researcher at the Regional Occupational Health Centre (Eastern), Kolkata. "The study will help take measures to check exposure and the occurrence of the diseases among the workers,' he claims.

"This research is strong enough to create an awareness of the problems faced by grain storage warehouse workers,' says Somanth Gangopadhyay, Calcutta University. The study, published in Industrial Health (Vol 45, No 3), was supported by a group of international scientists including those from the University of Cincinnati.