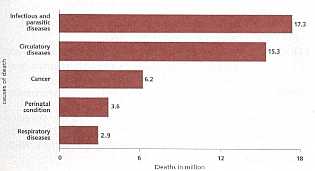 However, the report presents a better picture for the 21st century. Global life expectancy at birth, which is at present 66 years, is projected to reach 73 years by the year 2025. More people than ever before will complete 100 years.Citing examples, the report says that France is projected to have 150,000 centenarians by the year 2050, as compared to only 200 in 1950.

The gap between the rich and poor will widen. Says Hiroshi Nakajima, Director General of who: "Tragically, while average life expectancy has been increasing throughout the 20th century, three out of four people in the least developed countries today are dying before the age of 50 - which was the global life expectancy age half a century ago." Reducing premature deaths will be one of the greatest challenges of the next century, he says.

By the year 2025, twenty-six countries will have a life expectancy of above 80 years. It will be highest in Iceland, Italy, Japan and Sweden followed by Australia, Canada, France, Greece, Netherlands, Singapore, Spain and Switzerland. The other countries which will witness a rise in their life expectancy will be China (75 years), Russia (72 years) and India (71 years). The countries with a lower expectancies will be Mali and Uganda (59 years), Gambia and Guinea (58 years), Afghanistan, Malawi and Rwanda (57 years).

The report says that the last five decades of socio-economic development and major advances in health care have benefited people in most countries. "The most important pattern progress now emerging in general is an unmistakable trend towards healthier, longer life," says the report.

More people have access to minimum health care, safe water supplies and sanitation facilities than ever before. Most of the world's children are now immunised against six major diseases of childhood. Infectious diseases such as poliomyelitis, leprosy and hepatitis b will be eliminated or reduced to every low prevalence levels in the developing countries by the year 2025.

The report predicts that in industrialised countries, heart disease, stroke and cancer will be the leading causes of death. As deaths due to heart disease and stroke decline, deaths due to cancers will increase. In the developing countries, non-communicable diseases will become more prevalent largely due to the adoption of "western" lifestyles and their accompanying risk factors- smoking, high-fat diet and lack of exercise.

The report was based on data gathered in the past 50 years combined with who's latest assessment of global health, to project health trends for the year 2025.