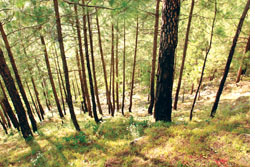 Some 15 years ago, pine-covered hillsides were the typical images of Karsog in Himachal Pradesh's Mandi district. But pine provided little fodder for cattle. People in its villages preferred broadleaved species, so they started planting oak and other fodder trees. Over the years, pine monoculture in Karsog has been replaced by forests of oak, amla (Indian gooseberry), pomegranate and other trees.

"Cattle-rearing was a major occupation in this area. Most of the forest was sealed off and we did not have any place to graze our cattle. We'd bring grass from distant places. So some of us got together during the literacy campaign of 1992-93 and started telling people that the forests belonged to them,' says Maina Devi of Mahadev Banboni village in Karsog tehsil. Women were in the forefront of this campaign. "They decided what trees they wanted in their forests,' says Nekram, a member of the forest committee in Nanj village, where the first efforts were made. "Eventually, the initiative spread to 80 forest committees all over Karsog.'

But it was not a simple matter of creating awareness. The people did not receive much cooperation from forest officials, despite a shift in the department's strategy away from pine monoculture. According to Pankaj Khullar, the state's principal chief conservator of forests, the emphasis on pine has been moderated since 2001. "Pine now forms 15 to 20 per cent of the plantation programme,' he says. Middle- and lower-rank officials, however, still prefer hardy pine species, Pinus wallichiana and Pinus roxburghii, for they show good survival rates with minimum effort. "Pine is not eaten by the cattle, is indestructible by fire and survives adverse conditions. However, it gives us neither cattle feed, nor quality fertilizer. The leaves of pine form a thick carpet on the ground and do not allow the grass to grow,' says Nekram. Extensive pine monoculture has also been blamed for forest fires because pine needles are highly inflammable, though the burnt tree regrows by itself. In 2005-2006 a record 8,19

5 hectares of forest in Himachal Pradesh was lost to fire.

While Khullar claims people are consulted about the species they want, villagers complain that the forest department discourages independent forest committees formed to give such suggestions. "They bring labour from outside to plant pine saplings if we refuse to do so. There is hardly any meeting with the villagers before plantations are planned,' says Maina Devi. But she admits that villagers are not always assertive. "Young people are only interested in their grass and not in the efforts to keep getting it. It is very difficult to get them actively involved in the effort,' she says.
Renewing efforts Of the 80 forest committees constituted in Karsog, 30 are active, but the initiative is not dying down; it has only suffered a setback. Rahul Saxena of Lok Vigyan Kendra, an ngo trying to boost such efforts, says there is a good network of