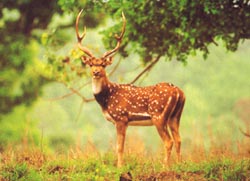 a proposal to simplify rules allowing hunting of wild animals that damage crops in villages in Madhya Pradesh (mp) is pending with the state government. According to sources in the state forest department a move is afoot to ease the existing laws for hunting animals such as wild boars, cheetals and sambars to help mitigate crop predation in the state.

A P Dwivedi, the state chief wildlife warden, says that the programme will lay down the ground rules. This will facilitate the granting of hunting licences to people who can then sublet them further. "The existing provisions of the Wildlife (Protection) Act, 1972 allow the killing of animals that cause harm as a last resort. We want to issue guidelines that will ensure these provisions can actually be implemented,' points out Dwivedi. However, the plan has incited a heated debate within the state and also amongst conservationists in the country. "The state wildlife board has already shot down a proposal of culling animals put forward by the forest department,' says Pratibha Shukla, member of the mp state wildlife board. She points out the state has not yet considered any other remedial measures such as crop insurance and translocation of schedule I animals.

What has fuelled the row is the keen interest evinced by a section of the department on introducing a provision to turn hunting of crop predators into a recreational activity. At a recent seminar in Bangalore, Madhya Pradesh Forestry Project director H S Pabla suggested the following measures to control crop eating animals:
 Create hunting blocks of about 2000 hectares in size

 Appoint agents in each block for commercial hunting of animals

 Allow the hunter to take up to five kilograms of meat.

In a study, Pabla estimates that the capital costs involved in institutionalising such a programme would be around Rs 4.5 crore. The estimated annual income from the plan in mp could be around Rs 1 crore to the government and more than Rs 30 crore for the people residing in the vicinity of forests. He says the move would reduce the Rs 600-crore lossses incurred annually due to crop damage and as protection costs.

According to Dwivedi, the existing norms prohibit recreational hunting. Therefore, for such a proposal to come through the act itself will have to be amended. But he did not confirm whether the proposed guidelines provide for recreational hunting or not. Experts have also reacted with guarded optimism about the proposal. Ashok Kumar of the Wildlife Trust of India, says, "I am sceptical about the scientific principles behind deciding how many animals should be killed.' Ashish Kothari of Pune-based non-governmental organisation Kalpvriksh, co-organisers of the Bangalore seminar, says that the regulation and control regimes do not permit the effective implementation of such plans here.