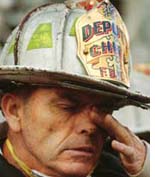 A recent study into the health effects of dust after the collapse of the World Trade Centre has linked the tragedy to a fatal lung disease. The study that came out on May 7 found that a rare type of lung-scarring condition was contracted at a higher rate amongst rescue and recovery workers in the years after the centre collapsed.

Researchers from the New York City Fire Department Health Services, the New York University and the Albert Einstein College of Medicine conducted the study. They found that 13 firefighters and emergency medical service workers suffered from sarcoidosis. Researches studied firefighters 15 years before the attack and five years after.

The study said that rescue workers contracted sarcoidosis in the year after the incident at a rate more than five times higher than in the years before the attack.

The researchers noted that after a rise in the number of cases of sarcoidosis and similar illnesses after the attack, there was a drop in incidences. But they remained higher than normal for several years. In total, doctors have found 26 cases of sarcoidosis in the five years after 9/11, a figure surpassing the combined total for the previous 15 years.

Other studies have also shown that a high percentage of rescue and recovery workers developed persistent coughs and other respiratory problems. But this is the first study to provide enough data on the possibility of rescue worker contracting a serious illness after the attack.