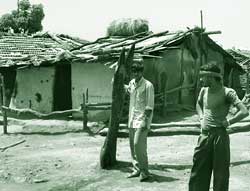 Forest officials at the Melghat tiger reserve (mtr) have a strange predicament: the management plan of this 1,676.93 square kilometre (sq km) reserve in Maharashtra’s Amravati district cannot be executed, even though the state’s chief wildlife warden gave it his assent way back in November 2003. The plan waxes eloquent about involving local tribals in managing mtr. B ut this falls flat in face of an affidavit filed by the Maharashtra government. In this 1995 undertaking, the state government assured the Nagpur high court (hc) that it will not allow any commercial exploitation of forests within the multiple-use area (mua) of the mtr.

What’s an MUA?
To understand that we will have to go back to 1994: till that year, mtr comprised a core (the Gugamal national park) and a buffer zone (the Melghat sanctuary). The core area was uninhabited, while there were 61 villages within the sanctuary. As per mtr’s pre-1994 management plan, these villages with a population of 28,000 were to be relocated outside the sanctuary. In 1994, the forest department (fd) realised that relocating so many people was unfeasible. “One had to be practical. There was no land and political will to relocate 61 villages. The challenge was to marry the interest of both the tiger and the tribal,” says M G Gogate, ex-conservator of forests and field director, mtr.

So, an enquiry was conducted and as per a notification dated February 15, 1994, 526.90 sq km of the sanctuary was re-classified as an mua (see map: Melghat today) . The area comprised 39 villages and the people here were to be given certain rights to collect non-timber forest produce (ntfp). The order, however, raised hackles of conservationist groups. In 1995, the Mumbai-based Bombay Environmental Action Group (beag) filed a public interest litigation (pil) in the Nagpur hc pleading that the move would destroy the mtr. In response, the Maharashtra government gave the hc an undertaking that it won’t allow “commercial extraction of forest produce” in the mua.

Trouble begins here The term “commercial extraction” has placed the mua in an ambiguous position, even before the court has delivered its verdict on the beag petition. Conservationists interpret the term as “status quo”, while the fd believes it only implies a bar on activities such as bamboo harvesting. The department is, however, too cagey to implement its programmes for the mua. For example, in 2003, the fd came out with a working scheme for bamboo-bearing areas in the mua ( see box: Just on paper, and table: Scientific, but just on paper). Officials of the department estimate that Rs 2,000 crore can be raised anually