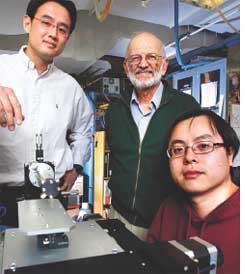 Infrared rays can easily detect the contaminant in milk

in september 2008, milk contaminated with a chemical called melamine led to renal complications in 300,000 children of China; six died. This chemical, used in producing plastics and glues, is also used in food adulteration. The high nitrogen content in the chemical can make food look more nutritious by increasing the measurable protein content of the food. The scare made its way to India and milk powder imported from China was banned.

The various methods used so far to detect this food pollutant are time-consuming and costly. For example, the Food and Drug Administration, usa, uses a method called mass spectroscopy. Though this method can detect very low levels of melamine, the sample preparation is time-consuming and labour-intensive. In other methods, the instruments used are costly. As a solution to this, researchers from Indiana and Purdue Universities in the US have found that infrared rays can help detect melamine in milk powder in less than five minutes.

The researchers tried a method called infrared spectroscopy which uses a device that hits the milk powder with infrared rays. The device then calculates the wavelengths of infrared rays that the powdered milk absorbs. Each chemical substance absorbs a wavelength that is specific to it. This is its fingerprint. That of melamine is known. So all that is needed after that is a trained chemist who knows how to read the the graph of the absorbed wavelengths and determine what compounds are indicated by specific peaks.

Quick and cheap, the method could be conveniently used for screening milk powders for melamine.

The researchers said that the study, published in the May 27 issue of Agriculture and Food Chemistry is the first documented attempt to detect melamine in milk powders (infant formula) using infrared spectroscopy.

Lisa Mauer, the lead author of the paper, said that though this method has been used to detect several types of adulteration, detection of melamine has never been attempted before because water interferes with the infrared imagery of melamine.

However, this team detected melamine in powdered milk.