The new culprit of global warming 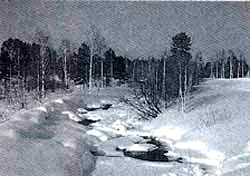 BOREAL forests -- consisting of mostly coniferous and some deciduous trees in the northern hemisphere -- are being destroyed faster than before and may be making the world a hotter place. Boreal forests comprise one-third of the world's forests and cover almost 8 per cent of the land surface.

About 70 per cent of these forests are in Siberia, 22 per cent in Canada and Alaska and most of the rest are in Scandinavia.

Clear-felling
In recent years, much logging has taken place in Siberia, mainly in a manner that leaves no tree standing and increases soil erosion. This releases methane -- a potent greenhouse gas -- besides reducing the scope for absorbing atmospheric carbon dioxide. Siberian forests are also being depleted by fires that eliminate at least 0.64 million ha each year.

Though the rapid degradation of boreal forests gets less publicity than the decline of tropical forests, it may be playing a major role in contributing to global warming, warns British environmentalist Norman Myers, writing in The Guardian.

Unlike in tropical forests, the majority of the carbon in the boreal forests is stored in forest litter and the soil. Most of this is released in the wake of logging as often reforestation is not successful or simply not undertaken. Siberia's forests contain one-fifth of the world's trees and one-third of the wood and harbour at least 30 billion tonnes of carbon, according to Anthony Scott of the Pacific Energy and Resources Center in California.

Climatologists estimate 40 per cent of the boreal forests could disappear in the foreseeable future, releasing upto 3 billion tonnes of carbon every year -- as much as is reportedly being emitted from tropical deforestation today, according to Myers. This could lead to large-scale additional release of carbon dioxide and greater methane emission. It will also speed up global warming, leading to a greater decline in the forests.