Not just any old mollusc 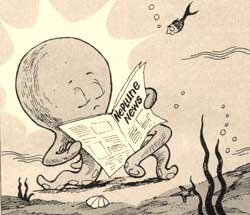 AN octopus can learn tasks simply by watching other octopuses at work. This observation has surprised researchers who believed such mental capacities to be the sale preserve of higher vertebrates like mammals. The octopus belongs to the family of molluscs which are invertebrate.

Research on Octopus vulgarid, the common octopus found throughout temperate and tropical seas, was conducted by Graziano Fiorito, a neurobio)ogist at the Stazione Zoologica, a marine biological research centre in Naples, and Pietro Scotto of the Universita di Reggio Calabria. In a recent issue of Science, the scientists have reported that, in the first stage of the experiment, an octopus was trained to swim to one of two differently coloured balls in its tank. The "wrong" one gave a mild electric shock, while behind the other was a reward of fish.

Other scientists have also found that the octopus has the most complex brain among invertebrates. I Z Young, an experimental psychologist at the University of Oxford in the UK, discovered that octopuses can take in specialised information and then generalise from those specifics in a way that allows them to make appropriate decisions when faced with novel situations. Aquarium-keepers say that these intelligent animals are exceptionally curious and have been known to crawl out of their tanks in search of potential prey spotted in another room.