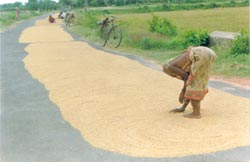 sumit Naik, a migratory worker in Bhubaneswar, has decided to be ‘absent’ from his native village of Ektal for much longer this year than is usual. He is forced to stay away from his home. Reason: his presence would worsen the food scarcity his family faces, despite having 1.5 hectares of cultivable land. Sumit’s younger brother would soon join him. Both of them are considered lucky