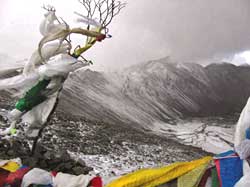 a large hole may be developing in the ozone layer over the Qinghai-Tibet Plateau, says a Chinese study. The area of depleted ozone appears to be spread over 2.5 million-sq km, which is almost three-fourth the size of India, says the study published in a recent issue of the Chinese journal Scientific Report.

The study found that ozone concentration in the affected area was 220 Dobson Units (du) from December 14 to 17, 2003, with a record low of 190 du ( 100 du equal a one millimetre-thick layer of pure ozone at one standard atmospheric pressure and a temperature of 0