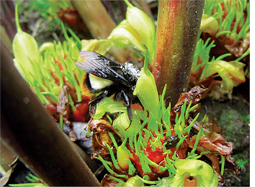 The decline has been largely attributed to a spate of viral and fungal infestations over the past three decades. But new research says pollen theft by a local breed of honeybees, which farmers maintain to facilitate pollination, could also be a major cause.

What happens? Large cardamom is a key player in India's spice trade (see box: Spice woes). As the fruits and seeds are the economic products of the plant, effective pollination is crucial, and to a large extent determines the yield.Two scientists from Bangalore's Ashoka Trust of Research in Ecology and the Environment (atree) have found that the honeybees (Apis cerana F) are actually leaving 70 per cent of the cardamom flowers un-pollinated; at the same time depriving the flowers of enough pollen for pollination by their only other visitor