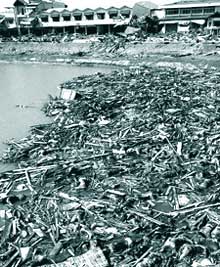 in its attempt to create order in the chaos that has followed the tsunami disaster, Sri Lanka is facing the complexities of reconstruction. One particularly problematic sphere is coastal regulation. While there is a renewed push from the government for regulating construction along the country's coasts, its efforts lack public support and this might prove to be their undoing.

Sri Lanka's coastline is dotted with hotels, small guesthouses and fishing hamlets, most of which were built in violation of the Coast Conservation Department's (ccd's) Coast Conservation Act (cca), 1981. ccd director R A Samaranayake says although the rules have been operational for so many years, they were never fully enforced due to pressure from local politicians. "Politicians promise land to unfortunate people. They build illegally on these lands and then lose everything.' Samaranayake explains:"We have different no-building zones for different stretches. In the east, we have a 100-metre (m) building restriction. In the west and the south, it varies from 40 m to 60 m, depending on the vulnerability of the area.' But the cca is revised every year to suit political whims. The latest revision went to the cabinet in December 2004, days before the disaster struck.

Besides the ccd's rules, the Urban Development Authority (uda) also introduced new rules recently. They ban construction within 100 m from the shore in the south. In the east, which is flatter and more vulnerable to the effects of tidal waves, this limit extends to 200 m. Construction beyond this point upto 1,000 m is permitted only as per uda rules. Only harbours, ports, units of fisheries industry and archaeological sites are allowed in the no-building zone. But Samaranayake warns: "We may have all the rules but the government must be firm.

People resist dislocation In addition to the fact that land is a major political tool and so the fate of the coastal regulation rules, old and new, will be decided by politicians, there is another problem. The people of Sri Lanka are strongly opposing any move to dislocate them, despite having suffered so much.

Ayatul Mohamed Haniffa, 47, owner of a 13-room hotel and restaurant on the beach at the picturesque Arugam Bay on the east coast, is determined to not shift his hotel. "I won't leave. I will rebuild a restaurant from scratch. I know how to cook.' Arugam Bay is known as one of the top 20 spots in the world for surfing. It attracts thousands of tourists every year. Hotel owners fear they'll lose their business if they move inland because the demand is for beachside accommodation. G D Susantha, a fisherman in Paiyagala South, is not afraid of staying near the sea. "I'm a fisherman. I've got to be near the sea. I'm not worried about another tsunami. They come every 2,000 years,' Reuters quotes him as saying. In contrast, Ramalingam Allagamma of Karaitivu village, who has lost her husband in the disaster, doesn't care: "I don't know. If everyone goes, I'll go too.' But Allagamma is not part of the majority, who want to stick to the land that is their home and source of livelihood. The Church has also joined the fisherfolk in their non-cooperation. Most fisherfolk are Christians and the Church fears its institution will be weakened if they are dispersed.

Alternative plan? Even the unhcr, which is helping with the reconstruction work, is not supporting the relocation plan. As a matter of policy, the agency doesn't get involved in forced relocations. Robyn Goves, senior external relations officer at the unhcr's Colombo office says unhcr has raised serious concerns regarding the plan. "First because it further displaces people who have suffered a lot and, second, the reasoning behind this is not very clear,' she says. "We need a transparent and rational policy,' Goves suggests, adding that civil society groups also share these concerns.

Samaranayake believes early warning systems and barriers will be more helpful. He points out that massive sand dunes in Bundala in the southeast, Seenigama in the south and Pottuvil on the east coast acted as natural barriers and minimised the tsunami's impact. But he also feels this is the time the rules can be enforced and the beaches rid of illegal constructions.