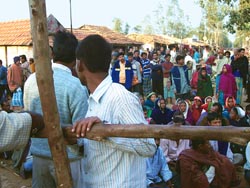 To reach Hairpur, a remote fishing village along the West Bengal coast, one has to get off the main road and walk 2.5 km over a broad mud dyke. Access to this path is blocked by a log barrier. Outsiders are not welcome.

Haripur villagers have been protesting since last September against a 10,000-mw nuclear power plant on their land. In November, they and people from neighbouring villages turned up in thousands on two consecutive days to block a 12-member site-selection panel from the department of atomic energy.

If the project comes through it will displace at least 25,000 farmers, fishermen and their families. The villagers aren't giving in. "If the project materialises we will have nowhere to live, nothing to eat, and the fish in the sea will die,' says Sandhya Dalal, who lives in a one-room shack by the sea with her fisherman husband and two little sons."Surely when such decisions are made, the government should first ask us if we want such a project near our homes.'
Little logic Coastal east Midnapur earns about Rs 360 crore in revenue from fish exports: that's 60 per cent of the state's export earnings from fishing. It also boasts a rich agricultural economy. The fertile, multicropped land yields paddy, pulses, vegetables, paan (betel) leaves, chillies and several fruits. Income from this land is high. Even, small farmers like the Manna brothers