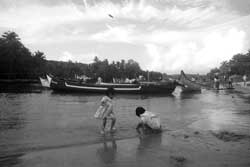 EVER since BJP's Manohar Parrikar became the chief minister (CM) of defection-prone Goa, he has managed to win over several potential critics - ranging from a section of non-governmental organisations (NGOs) and one-time rivals, to former student radical groups. But his plan to get an apolitical environmental campaigner to approve a beach privatisation project appears to have backfired.

Microbiologist Nandkumar Kamat, a Goa University project scientist and a veteran green crusader, was named to head a one-man commission to assess a proposal to privatise Miramar beach - one of Goa's most popular resorts. To the state government's chagrin, not only has Kamat rejected the move, he has also come down heavily on the local authorities for neglecting the ecology of the region.

His 300-page report, with 66 photos based on site inspections, is aptly titled 'Castles on the Sands'. The panel has taken into consideration the "strong views expressed by the public" on the subject, the "deficiencies" in the government plan and the "ground truth". Kamat has looked at an area beyond the 1.7 kilometres along Miramar beach that was to have been 'privatised'. His argument: other areas forming a part of its watershed are intrinsically linked with this stretch. A wide spectrum of the state's denizens, including scientists from the Goa-based National Institute of Oceanography (NIO), lawyers, journalists, women's groups and former student activists, have expressed their views in the hearings before the commission.

Earlier, the Parrikar dispensation had floated the idea of handing over the management of the beach to private parties on the plea that the government could not handle the general upkeep of the site. Miramar is located barely three kilometres from the heart of state capital Panaji, and is among the most favoured recreation spots.

Stung by unpleasant experiences in the past, the people were nearly unanimous in opposing the plan. The people of the state have seen big hotel groups virtually usurping public property in the guise of 'privatising' facilities, making it the exclusive preserve of the affluent. For instance, a site in the suburbs of Panaji is being misleadingly projected as a "private beach" in a bid to attract wealthy clients. Another luxury group has taken over a large area with grandiose plans to build a Disneyland-type facility. But construction work has yet to get underway. Then there is the hotel that has taken charge of a prime riverside property in Panaji, offering entry only to those who can foot its hefty bills.

The residents give pride of place to Miramar, so far left untouched by congestion and commercialisation, feels Kamat. "Consequently, they are willing to allow only notified free-access points that do not disturb the dune flora. They believe that Miramar can do without facilities such as landscaping, water sports and children's parks," he adds. However, according to Kamat, there is some support for the selective privatisation of the non-mechanical cleaning of beaches, parking on the landward side and other such services.

The commission's study has brought the environmental degradation of Panaji and Mandovi river into focus. It observes that beach-erosion is taking place at an alarming rate and the town's sewerage is choked. "The dumping of 10 million litres of untreated or partially treated sewage on the beach from the effluent treatment plant at Tonca is a serious matter," says Kamat. Issues regarding the need to protect sand dunes, the powers of the municipality (which was, incidentally, kept in the dark about this plan) and the likely impact on migratory birds have also been raised.

Kamat has found "a lot of merit" in an alternative plan drafted by local civic group People's Movement for Civic Action (PMCA). "Not a single government authority has paid any attention to integrated drainage planning in the Miramar beach area. Local fisherfolk are prepared to lend a hand in keeping the beach clean if given the opportunity," he notes. The panel estimates that some 350 fisherfolk catch about 1000 metric tonnes of 30-40 species of fish. They generate an income of Rs 2 crore to Rs 4 crore per year.

"Miramar beach has evolved over the past at least hundred millennia and has been studied by NIO scientists from 1973 onwards. Any plan based on a rapid, five-month study with a techno-financial and engineering focus for a fragile beach ecosystem like Miramar has built-in risks and hazards," points out Kamat. Sensing the public mood, the state government - which was at one stage also hinting at privatising the Calangute and Colva beaches - has shelved the proposal for now.