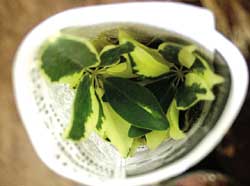 I was the wrong person for the right story at the wrong time. But I didn't realise this when I got off at Rajahmundry station (location: East Godavari district, Andhra Pradesh).

I called up Venkat Rao, who owns a plant nursery in nearby Kadiyam mandal. Over a laboured conversation featuring three distressed languages (Telugu, English and Hindi) and two incompetent mobile service providers (Reliance and bsnl), I asked for directions. After a long pause (it was in Hindi, I think), Venkat said he would get me picked up. It will be a silver Mahindra Scorpio, he said. After meeting a series of anguished rural folk in farmer suicide country, this was a shock. I gulped, walked across to a news vendor, and promptly bought a copy of Frontline