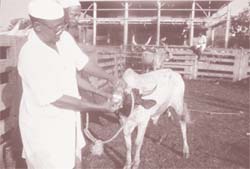 "There are more than 10,000 cattle and 54,000 pigs in the feedlot and the decision has been taken to vaccinate rather than cull them all,' said Laurie Bosman, president of the Mpumalanga Agricultural Union. In September 2000, thousands of animals were slaughtered in neighbouring KwaZulu-Natal province after the disease was detected.

A number of countries have partially or totally banned imports of South African livestock and meat products after incidents of the disease were reported. This has led to a loss of millions of dollars for the agricultural industry. South African Meat Industry Company, an umbrella organisation of the government that looks after all aspects of the meat industry, has been working towards creating a special meat certification process to allow exporters to resume their business.