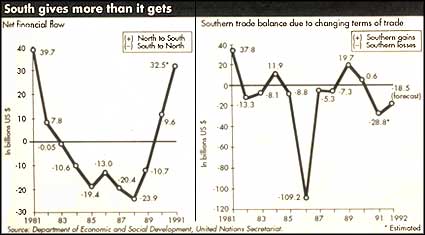 FOR THE first time in a decade, developing countries have received more money from developed countries than they returned as interest on debt. But losses caused by declining terms of trade continued to offset the gains in aid. The United Nations secretary general's report, however, cautions this turnaround in resource flow "may have very little to do with any improvement in the prospects of growth or the rates of return in developing countries."

Contrary to popular perceptions that the North was the donor, an overview reveals a net outflow of $98.5 billion from capital-importing, developing countries between 1983-89. But in 1990 and 1991, the trend reversed and the net inflow from the North to the South rose to $42 billion. But the commodity-dependent South lost even these gains because of trade losses amounting to over US $29 billion in 1991.

The financial transfer estimates, however, are deceptive and do not measure Northern largesse accurately. In Africa, for instance, the sharp rise in official grants during 1990 and 1991 came largely as a consequence of the Gulf War, when the industrialised countries greatly stepped up their "official aid" to war allies such as Egypt. But for the rest of Africa -- caught in the grip of a devastating drought and famine -- the flows remained reversed, with the poor paying back more than the aid they received.

With true diplomatic finesse the secretary general's report reflects on this point: "While the flow of official grants and credits has remained comparatively large and stable in the past five years in the countries of sub-Saharan Africa, there was a sharp rise in official grants in other African countries, largely as a consequence of the conflict in the Persian Gulf." So much for aid.

The heavily indebted Latin American countries also continued to empty their coffers to pay interest. In 1990, Latin American countries paid back US $15.6 billion more than what they received. In 1991, they still had a net outflow, though considerably reduced to US $4.4 billion. The turnaround came mainly because of short-term borrowing and return of flight capital -- about US $23.5 billion for the 15 most indebted countries, mostly Latin American. Mexico had a substantial increase in foreign direct investment, largely fuelled by the imminent conclusion of the North American Free Trade Agreement (NAFTA).

But these figures are again illusory. The net flow of medium-and long-term foreign private credit and official aid, against short-term borrowings, continued to be negative by substantial amounts -- $24.4 billion for the 15 most heavily indebted countries and US $20.7 billion for Latin America as a whole, in 1991.

Asians performed best among developing countries, receiving net positive flows of US $42.7 billion in the last two years. On the whole, the largest shift in financial transfers which may be a mixed blessing as the debt continues to grow