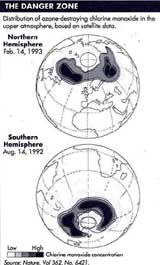 TRADITIONALLY associated with young lovers and new life, spring may soon become a time of worry because new data shows winter depletion of the protective ozone layer over Antarctica begins much earlier than was believed. The data also shows ozone levels over the Northern Hemisphere are falling rapidly.

Both findings are a matter of concern because ozone forms a protective layer shielding the earth from the sun's ultraviolet rays, which can cause skin cancer.

Data collected by the Microwave Limb Sounder (MLS) -- one of the 10 sensors aboard the US Upper Atmosphere Research Satellite -- suggests destruction of Antarctic ozone starts in early June, though the loss is not evident before mid-August. And, in most of the Northern Hemisphere, ozone levels in February 1993 were 10 per cent lower than the level a year earlier and 20 per cent lower than normal (Nature, Vol 362, No 6421).

J W Waters and his colleagues at the California Institute of Technology in Pasadena analysed the MLS data and found a strong relation between the low levels of ozone and the high levels of chlorine monoxide in the atmosphere. Chlorine monoxide is a compound derived primarily from chemical refrigerants and cleaning solvents known as chlorofluorocarbons (CFCs), which combines chemically with ozone and destroys it, but this reaction takes place only at low temperatures. Ideal conditions for ozone depletion over Antarctica are found in spring. Depletion is less in the Arctic, however, because the winters there are warmer and shorter.

Southern Hemisphere data for 1992 reveals chlorine monoxide builds up as early as June (the Antarctic winter), but ozone depletion starts only in mid-August. Waters argues that ozone depletion could well start earlier, but is hidden by the descent of ozone-rich air.