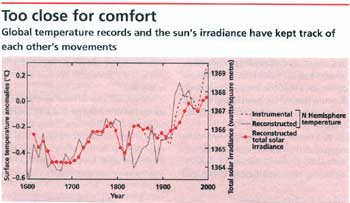 RESEARCH on climatic shifts and patterns acquires new dimensions every time scientists add a new reason to the list of factors responsible for these changes. The latest of these proposes that the waxing and waning of the sun - in a regular II -year cycle - may be responsible for as many as half the increases in global temperature. Approximately every II years, the number of sunspots - dark areas in the sun's photosphere - on the sun's surface increase, resulting in its dimming. The dimming of the sun would result in the reduction of temperatures on the earth. These sunspots, however, gradually vanish when the sun attains maximum brightness at the end of the 11 -year cycle. The sun now sports a large number of faculae or bright patches. At this point, temperatures on the earth increase. Researchers till now had not thought of taking the sun- climate link too seriously (Science, Vol 271, No 5254).

However, climatologists Daniel Cayan and Warren White of the Scripps Institution of Oceanography at La Jolla, California, us, compiled data on the Northern Hemisphere's sea surface temperatures - valid for the last 50 years - and compared the fluctuations in these figures with the variation in solar irradiance, inferred from 17-year- old satellite records. Their study ended with the conclusion that fluctuations in the two corresponded with each other. The duo now approached aeronomist Judith Lean of the Naval Research Laboratory in WashingtonDC, US, for a longer record on solar irradiance. Lean, along with solar physicist Peter Foukal of Cambridge Research and Instrumentation Inc, Massachusetts, us, came up with a 120-year-record of the sun's II - year sunspot cycle, and an even more comprehensive analysis resulted. "They (the two variables being compared) just nailed each other and you could not tell them apart," says a pleasantly surprised White.

On investigation it was found that the movement of gases on the sun (which is after all a ball of gases), created a magnetic field. These gases are heavier around the centre of the sun which is why the phenomena of waxing and waning are more prominent around the sun's central portion. The magnetic field of the sun is what interacts with the tropical and sub-tropical ocean basins of the earth and causes fluctuations in temperature. These climatologists have discovered that temperatures in these oceans - the easternmost and equatorial sections of them, to be precise - vary by 0. I'c, every I I years. This is a pattern similar to that observed during the El Niho's (a periodic interaction of the equatorial section of the Pacific Ocean and the :tmosphere, that heats the eastern tropical part of the ocean and alters climates worldwide) four-to- seven-year cycles. According to White, similar forces may be at work in both the cases. Significantly these variations in temperature were found only in the topmost layer of the oceans (the part that was immediately exposed to the sun's warmth), and failed to occur at greater depths.

Although there have been isolated and unconfirmed studies on the sun-climate relationship in the past, this is the first time such findings have been com- plemented by other studies conducted by some fellow scientists. Prompted by these recent researches, Vikrarn Mehta, a researcher at the Goddard Space Flight Center in Greenbelt, Maryland, us, examined records of ocean temperatures and solar radiation. His findings revealed a number of II -year pulses of ocean temperatures which were in synchrony with the sunspot cycle.

Meteorologists Gerald North and Mark Stevens of Texas A&M University, us, also reported the presence of the II - and 22-year (the cycle could be taken for a 22-year-long one if the fact that the magnetic forces of the sun take an additional I I years to revert to their original position is taken into account) surface temperature cycles, in the global temperature records of the past century. However, their findings showed a minute variation in temperature of only 0.02'c, which is a fifth of the White and Cayan's finding. This anomaly could be due to either the methods employed by the Scripps study, or as North points out, it could be the interaction between the ocean and atmosphere, which increases the temperature in the process. The scientists from the Scripps Institution supported the latter theory. They explained that since it was the equatorial and easternmost parts of all the ocean basins which showed greatest evidence of the interaction between the sunspot cycle and ocean, to move away from this region would mean recording a drop in temperatures.

Another study complementing the Scripps study was conducted by Judith Lean. It was based on the sun's behaviour over the last 400 years. Because developing scales of temperature variation on a century-wise basis would be difficult, Lean, along with Juerg Beer of the Swiss Federal Institute for Environmental Science and Technology at Zurich, Switzerland, and R mond Bradley of the University of Mass achusetts, decided to study sun-like stars. Earlier, the astronomer Sallie L Baliunas of the Harvard- Smithsonian Center for Astrophysics in Cambridge, Massachusetts, had divided these stars into two categories: those-that appear to have sunspot cycles and those that do not. While the former were found to resemble the sun as it looks today, the latter were considered reminders of what the sun must hai@e been like 300 years ago, during the Ice Age, when the earth experienced a prolonged cold spell.

Taking the wavelengths of the ultra- violet rays emitted by noncycling stars as a measure of the faculae, Lean and her colleagues calculated the abundance of faculae in these stars. They estimated that 300 years ago, the sun was dimmer by 0.25 per cent. Thereafter, relying on the sunspot records, the scientists tracked the brightening of the sun over the next few centuries. This was then compared with the temperature records of the Northern Hemisphere and a strong correlation between the shapes of the graphs - from the results obtained - was established. Before the beginning of the Industrial Revolution and the emission of greenhouse gases (the period between the years 1610 and 1800), there was a close correspondence between the two. This led Lean to conclude that after the Ice Age, 3/4ths of the warming that took place was due to the brightening of the sun, even though the sun has contributed to only 1/3rd of the rise in global temperatures since 1970. Lean feels that if the sun did play such an important part in recent global warming, the contribution made by the greenhouse gases to climate change should be reduced. Their contribution could be 20 per cent lower than what had been predicted earlier.

Climatologist T M L Wigley of the National Center for Atmospheric Research in Boulder, Colorado, us does not agree to the amendment of the theory on greenhouse pollution, but he feels that Lean's "qualitative conclusions are right". However, he does not blame the sun too much for the rising temperatures, observed over the last 100 years. "I think it is somewhere between 10 and 30 per cent of the past warming," he says.