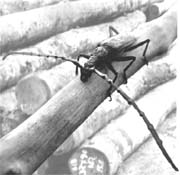 after affecting over one-sixth of the total sal ( Shorea robusta ) forests in Madya Pradesh in 1997, the sal borer is back with a vengeance. According to media reports, at least three million sal trees are affected in Bihar, West Bengal, Himachal Pradesh, and Uttar Pradesh. Climatic changes like erratic rainfall have made things worse. "This is not confined to sal trees alone