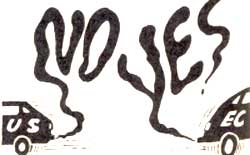 THIS fortnight the European Commission unveiled a plan, which its environment comissioner, Carlo Ripa di Meana, called "revolutionary" to staise a carbon dioxide emissions at their 1990 levels by the year 2000.

Half of this reduction is to be achieved through a tax on carbon fuels - of $3 on a barrel of oil equivalent, rising to $10 by 2000. The tax would be partly levied on the carbon content of fuels such as coal, oil and gas, while the rest would be on all non-renewable energy sources including nuclear energy. But with obvious back-tracking on its proposal, the EC has announced that the tax will now be imposed only after USA and Japan agree to introduce similar measures. And if the other industrial countries failed to act, a much lower tax would be levied.

USA, Japan, and the oil-producing nations are strongly against imposing such a tax. Ripa di Meana says that the EC has faced a "violent assault from industrial lobbies, while the Gulf countries have even threatened to break off diplomatic relations" over the tax issue. He also complained against US lobbying saying, "Sometimes Big Brother's suggestions go too far. This move of the EC has been condemned by green groups across the region which want the EC to not hide behind USA. Others have pointed out that the tax itself is inadequate as a solution to global warming as the $10 tax on each barrel amounts to only a six per cent increase in oil prices.

Germany has been the most outspoken in its attack. The country's environment minister says he would try to get other EC countries to over-rule the commission and get Europe to go it alone. But with all the noise against, this hope for a cooler future seems feeble.