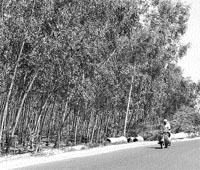 scientists have expressed concern over the gradual disappearance of several important north Indian tree species such as sal , sheesham and khair, due to various reasons.

The causes and remedial steps to save large forests of sal, sheesham and khair have been discussed at several workshops and seminars held at the Forest Research Institute ( fri ) in Dehradun during recent times.

In the districts of Muzzafarpur, Darbhanga and Gopalganj in Bihar, Bhiwani and Yamunanagar in Haryana, Gonda and Gorakhpur in Uttar Pradesh, many districts of Punjab, Una in Himachal Pradesh and Delhi, sheesham trees are drying up at a alarming rate. In seven districts of Madhya Pradesh and three of Uttar Pradesh, lakhs of sal trees infested with the sal borer insect have been uprooted to check the spread of the epidemic. While illegal felling of the khair tree has been on the increase because of the rise in its commercial value.