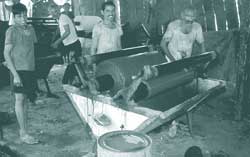 canadian scientists have set up a sophisticated computing lab that will help speed up research into diseases like cancer and diabetes. The lab allows researchers to view three-dimensional models of the smallest parts of the human biological makeup. The results are so realistic that one cannot resist reaching out to touch the images.

The us $3.7 million facility has been set up by the Alberta-based University of Calgary. It is far ahead of the handful of other virtual reality labs that are already being used in research. Its biggest advantage is that users operating from any part of the world can build models on their own computers, rather than being tied up for days or weeks programming at the lab site.

The key is the use of Java 3 d programming language, which allows scientists anywhere in the world to develop applications for the lab (www.msnbc.com , March 1, 2002). "This is the first prototype of a completely revolutionary system,' said Christoph Sensen, head of the project. "Parts of this technology exist elsewhere, but ours is unique in that you can programme it in Java 3D. This allows unlinking the programming and development from the final product.'

Similar technology is already used at other facilities studying the emerging field of bioinformatics, which involves mapping information used in life sciences research, such as the human genome sequence. The new facility would immensely help pharmaceutical firms, meteorologists and even oil companies. However, its focus will be medical research.

"What we are mainly planning to do is deal with complex genetic diseases in which you have to have huge data sets that need to be carefully organised in order to comprehensively understand how the disease works,' said Sensen. "Examples for these are diabetes, Alzheimer and cancer.' Using the modelling would mean considerably less time spent on physical experiments, because much of the groundwork will be done digitally.