Warning in the stalagmites 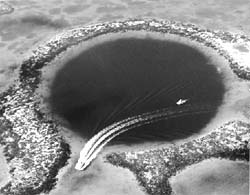 studying a half-metre-long stalagmite recovered from a now submerged cave in the Bahamas has shown that there were dramatic changes in the amount of radioactive carbon swirling around in the Earth's atmosphere during the last Ice Age. The changes were far greater than previously believed.

The findings serve a warning that climate change could affect the carbon cycle in ways not yet understood. The discovery was made by Warren Beck, assistant research scientist at Arizona University, usa . The information could have major implications for our understanding of past and future climate change.

The stalagmite was brought up from the Blue Holes of the Bahamas, the complex of limestone caverns created when sea levels were more than 100 metres lower than they are today. Because of the way they form, stalagmites can be used to determine past levels of radiocarbon in the atmosphere. They help establish a timescale for dating, and this information is checked against the more accurate method of uranium dating.

In this case, scientists from the Universities of Bristol, Arizona and Minnesota were able to look back 45,000 years ago