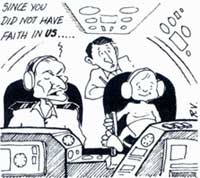 A US study refutes the notion that airline pilots nearing 60 are more likely to cause accidents than their younger colleagues.

The two-year study, which analysed accident data between 1976 and 1988, was undertaken to test the validity of a US Federal Aviation Administration (FAA) rule, which bars sexagenarian pilots from flying commercial aircraft with more than 30 passenger seats (Flight International, Vol 143, No 4366).

The age restriction is based on the premise that health and human performance deteriorate with age. But the researchers found there was "no... increase in accident rate for pilots as they neared their 60th birthday".